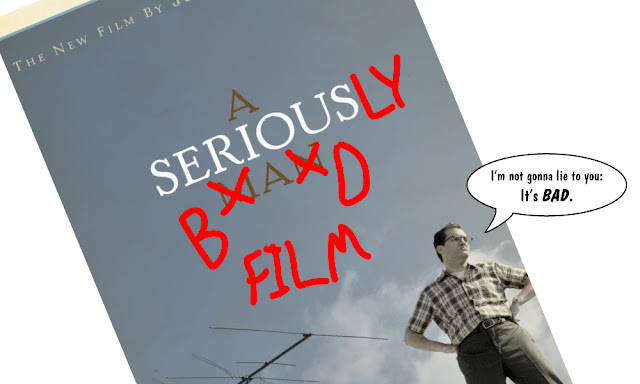 "It's a Coen brothers movie."

That was Brian's pitch to me. We had spent a good portion of our afternoon looking for movies at BuyBacks Entertainment in Erie, PA. Now, I'm not nearly the consumer of film that I used to be, but when Brian is in town, and when we decide to go to Erie, BuyBacks is almost always a stop. They were featuring a "buy three get one free sale," which I always find a good opportunity to catch up on some films that I may have missed. The problem I find is that it is often difficult to decide on that last movie. That day I was having a particularly tough time, because a used DVD store does not often have every film you could want for the price you want it for. I couldn't decide on the last film, and it was starting to get late in the day, so I told Brian that he could just pick one more movie and I'd use up one of my freebies to get it. To that end, he chose A Serious Man, which is a film written and directed by Joel and Ethan Coen.


Who are the Coen brothers?

I really don't know much about the Joel and Ethan Coen, other than they have directed some of the best movies that I've ever seen (Raising Arizona, The Hudsucker Proxy, The Big Lebowski, et al), and my favorite movie of all time, O Brother, Where Art Thou? In short, they're excellent directors with an eye for detail and memorable characters. But my first response to Brian was, "Yes, but it's a Coen brothers movie that you've never heard of." You see, I found out long ago that while the Coens have a history of pitch-perfect films, they occasionally churn out a forgettable yarn. Such was the case with The Man Who Wasn't There starring Billy Bob Thornton years earlier when we rented it. After suffering through two hours of a character actor that I happen to like waste his talents on a completely disengaging film noir knockoff I was amazed that I had found a Coen brothers movie that I hated. Oh, it was competent, just not entertaining. This was the warning I gave Brian.


A game of chance

When we got back to Brian's parents' house, we realized that we only had enough time to watch one movie. I presented Brian with The Town (also known as that movie that saved Ben Affleck's career), which neither of us had seen, and Brian presented A Serious Man. We couldn't decide, so we left it to a coin toss. One could infer from the fact that I wrote this article and not a review of The Town as a pretty good indicator of which film won. We popped A Serious Man in and began watching.

The movie starts with a tale about a Jewish man who after a spot of bad luck of not getting full value for his wares and losing a wheel from his cart is helped by a kindly old rabbi, who is a friend of his wife's family. When he goes home and tells his wife the tale, she tells him that the person in question died of fever three years ago, and that what he met must have been a dybbuk (a Hebrew word for a dislocated spirit. Yes, I looked it up.). He tells her that he invited him to dinner, whereupon the cheerful yet otherworldly is announced at their door. The man invites him in, and the old man refuses some soup. The woman takes this as a sign that he is a dybbuk and stabs the old man with her paring knife. At first he laughs, and his identity as a dybbuk is revealed! No, wait... the old man starts bleeding and says he feels ill, then leaves (presumably to go off and die in the snow). That's the first five minutes. What does it have to do with the rest of the movie? Not much.

The rest of the film focuses on Larry Gopnik, played by Michael Stuhlbarg, an actor who has been in many movies that you've seen, but never in any role that you'd remember. This is a period piece, and judging from the technologies that the characters use (and the fact that one character is obsessed with F-Troop) it must be the mid to late 1960s. This tidbit of information isn't really crucial to the plot, but then again, neither is anything else in this film. Larry is a professor of physics and a family man who... look, it's not really that important. All you need to know is that the movie is very Jewish (not like in the Woody Allen sense, but more like it is steeped in American Jewish culture and norms), bad things happen to Larry, every single one of which is exacerbated by the fact that he won't stand up for himself when the film's cast of detestable, selfish, self-centered individuals take advantage of him. Things start to go bad for Larry the moment his wife (played by Sarri Lennick in a makeup job so unsettling that she looks like every stereotype of a "Jewess" and succubus mashed together into one beautiful and terrifying hell-spawn) demands a divorce because she's into another man, widower Sy Ableman who is many years her senior. Have I mentioned that not one of these characters is likable? Not one? It's meant to be seen as a dark comedy (kind of like Fargo) I think, but the characters aren't particularly memorable, most of the "jokes" are just mean-spirited jabs at Larry's cuckold status, and the entire plot just slogs along at a snail's pace, so much so that Brian actually stepped out for a lengthy phone call and still didn't miss anything important (although he did miss the film's funniest moment BY FAR, when "the second rabbi" tells Larry a rambling story about a dentist's search for God. You really have to watch the film for context. But don't though, it's not that funny).

I hated this film. No, there's really no way to sugarcoat it. I LOATHED it, and I really don't know the reasons why. The film is shot beautifully, with perfect set pieces that really give someone the sense of what Minnesota suburbs in the 60s might have been like. The main character is a wishy-washy idiot who won't take ownership of his own life, and every other character just uses him for personal gain or to make themselves feel self-important. Scenes start, scenes go nowhere. Interesting parts are merely dreams and recollections, everything is random and nothing gets resolved. But you know what the strangest thing is?


This movie is a phenomenal critical success

I can't figure this one out. It scores 79% out of 35 reviews on Metacritic.com. It scores 89% on Rotten Tomatoes. That's the same score as The Imitation Game, an actually entertaining period piece with actually entertaining characters that actually has something to say. I really don't know how this detestable piece of film stays so high up. Am I missing something? I'm not saying that I haven't - I had to watch No Country For Old Men twice before I got something out of it, but I never want to watch A Serious Man again. Hell, I don't even want to be in the same room with it. Adam Arkin couldn't even save it, and I like me some Adam Arkin!

You know what I think it is?  I think that this film gets a free pass. That's all. Everyone likes The Big Lebowski, right? No Country For Old Men sure was deep. Okay, so I don't understand this movie, so it must be good -- on the level of the other Coen bros. films, I reckon. Maybe the 1960s setting appeals to aging film critics, hungry for a glimpse of their bygone youth. Or maybe it's more than that. Perhaps it's inflated by a community of Jewish critics so starved for works of cultural reference (if not significance) that the moment one comes along directed by Jewish filmmakers with a conscious effort to include as much Jewish periphery as possible, they jump for joy, kind of like the way evangelical Christians support all of their (unbelievably incredibly shitty) movies. That's all that I can figure out. This horrid film just gets a free ride. Please note film critics, that style on its own is not substance, good acting on its own is not good writing, and artistic merit on its own is not entertaining.
Posted by Unknown at 7:40 PM