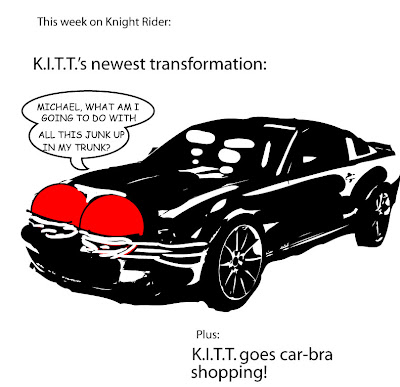 When the original Knight Rider was aired back in 1982 it was something novel and original. It ushered in the genre of shows where the cast took a back seat to the vehicles and technology in the program, and whether that derivative is a helicopter, a motorcycle with machine guns, or even an armored stealth semi-truck the basic premise always remains the same: a group of semi-legitimate undercover operatives fight injustice and crime with impressive technology. Knight Rider executive producer Glenn A. Larson even produced a few more of these shows in syndication, such as the eponymous Viper and the laughable Night Man. These shows are candy for the eyes and brain - usually not good candy like fudge or M & M's, but like Necco wafers or Tootsie rolls; the kind of candy you ingest when nothing else is available but you're in the mood for candy. Ironic that the very producer who started the genre should have run it into the ground so much that we are only now starting to see a return to it with Ford Presents Knight Rider(tm).

I am of course referring to the recent airing of what is the shining gem in NBC's new fall lineup. While the show's title is only ever stated onscreen as Knight Rider, for distinction in all future discussions I will refer to it as Ford Presents Knight Rider(tm) because it is unabashedly an hour-long Ford Motor Company commercial... and cleavage.

In short, that sums the show up, but what kind of review would this be if I didn't go into the exact detail of my dissatisfaction with a television show that nobody forced me to watch? The answer: not a very good one.

The first thing that I noticed, was that even before the opening credits the show's hero (Michael Traceur, a complete lack-wit played by Justin Bruening) and his best girl, Sarah Graiman (Deanna Russo, who must have been directed to just look pissed in every scene) are put into a situation where in order to save their lives they must take off their clothes. I'm not kidding. From there on the plot just drags along having no real point other than to convey to the audience that Mike Traceur doesn't remember about three years of his military life in Iraq, and that the rest of the cast knows something he doesn't.

Returning from the pilot show is Bruce Davison as Sarah's father Charles Graiman. I almost feel sorry for him as I have always found him a capable actor who is often cast in less-than-heroic roles; here he gets to finally play a competent good guy (taking over the role that Edward Mulhare as Devon Miles filled in the original series), but the show is so terrible and the rest of the cast so bland and stereotypical that his performance just seems like melodrama. I can't figure out Ford Presents Knight Rider(tm)'s female cast at all. They're all supposed to be "smoking hot," but the fact the FBI agent and the genius translator girl both look like they shop at the same store for teeny-bopper whores only seems to highlight the fact that the women filling these roles cannot act. Even the villain dresses like a cheap tart and delivers lines so broken and unconvincingly dramatic that you need to wonder what "Hooters" the auditions were held at. That doesn't convey "smoking hot," that just conveys "cheap," and "stupid." There are two other male characters in the show, a government liaison who is obviously supposed to be the show's resident douche bag and a genius nerd type who is supposed to be the comic relief. I understand in this, the post-age of Fox's Buffy the Vampire Slayer that television feels the need to give a seemingly invincible hero a bunch of "Scoobies" to deliver jokes and plot points that the hero can't, but the original Knight Rider only had four regular characters and one of them was a magical talking car, and that worked pretty well for what it was.

Ford Presents Knight Rider(tm) is not trying to be the original show though -- it is trying to be the original show on steroids. Everything is bigger, louder, cooler, and more tech savvy, which is part of why it fails on so many levels. In the original show, Checkmate's (the Knight Foundation's crime fighting organization's code name) mobile lab made perfect sense. If K.I.T.T. needed repaired, upgraded, refueled, or just a place to lay low the inconspicuous black semi truck was perfect cover. In the new show, there is a stationary lab and the car is then transported via a C-130 transport plane to near the location of where it is supposed to go. Being that everything seems to take place in southern California and Nevada and that it would take more time to get the stupid thing packed and airborne than to just drive the car where it needs to go this seems excessive, stupid, and wasteful (not to mention that the plane doesn't even stop - the car just drives out onto the runway - how needlessly dangerous is that?).

The absolute low point in the show though was K.I.T.T.'s transformation. Fans of the old show will remember when the original, aging Trans Am was given a "super-pursuit mode" to keep the show going, and to win the appeal of kids who loved the emerging transforming robots phenomenon. The show Viper even utilized this ability, as the Dodge Viper in the show could even become an AWD 4x4 vehicle with mud tires and a raised suspension. Those were both pretty cool for the time. The new K.I.T.T. has a pursuit mode too - and can also apparently transform into a Ford F-150 pickup truck. That's right: the FORD car transformed on-screen into another FORD vehicle. This was the dumbest thing I had ever seen on television. There's suspending your disbelief, and there's having it thrown to the lions right in front of you - this just happens to fall in the latter category.

So to sum up: I used to love Knight Rider as a kid, and when I grew up I loved the camp value of the fake science and pitifully shortsighted design flaws in K.I.T.T.'s abilities. Now, after seeing this new show, I can take the old show seriously again just by comparison.
Posted by ARCWuLF at 9:12 AM