This is my luck.

Brad and Anna have been in Europe since mid-June.  I have been stopping at their house every day since they left to water their plants and make sure that their house stayed in order.  It has been twenty-one days.  Twenty-one days of checking the locks, the lights, and the animal traps on the property.

Twenty days in a row, they're empty.  I begin to wonder if they even work.  Today, the last day I have to check them before Brad and Anna return, I check the mouse traps inside the house.  They're empty.   No surprise.   I water the plants inside.  I think that I've killed one of the ones in the kitchen.  I decide to water the plants outside before I leave.  Many of the flowers are starting to wilt.  I hope that's not my fault.  The twenty-first day, I check the large "humane" trap in the backyard behind the air conditioner...

For the first time ever, I see movement in the trap.

I'm not entirely surprised; every other day that I've been to Brad's I have come upon rabbits in the yard, nibbling on the flora.  Brad and Anna put it there to catch chipmunks and squirrels before they find their way into the house, but it is on the ground.  So a rabbit found it's way into the trap.

"How inconvenient," I say to myself, "how do I open this thing?"

I squeeze my not-insubstantial bulk between the pile of logs and the air conditioner.  I am a full two feet away from the trap.

"What an odd color for a wild rabbit," I think. 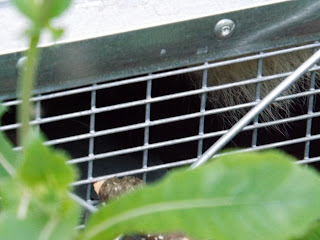 "It's almost black and whi--THAT'S NO RABBIT!" 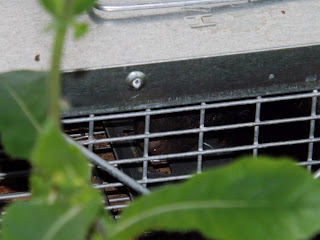 If these pictures seem like they're sort of ethereal and mysterious, I apologize.  I wasn't going to get any closer.  I spent a full 10 minutes trying to decide his fate.  He hadn't been in the trap for more than a day, so he wasn't going to starve.  What to do?  Call animal control?  Leave this little problem for my friends after they return from an Atlantic flight and a two hour-drive?  Crap.  I have to deal with this.

It was a really small skunk, probably just a "kit."  I still didn't want to take the risk.  I went to my car, removed my rain poncho, and put it on.  He was aware of my presence.  I broke off one of the branches in the pile next to the air conditioner, fashioning it into a stick.

It took me nearly twenty minutes of poking and prodding before I could unlock the trap's doors, but even then they didn't open easily.  I had to jam the stick between the release levers and into the cage before I could pry them open and keep them that way.

He still wouldn't come out, so I left him.  I didn't get sprayed.