Carnival of Souls -- take a look 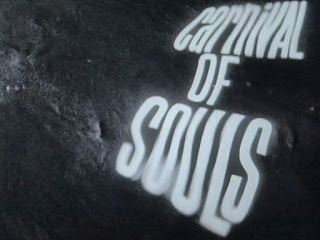 Tonight's Spooky Movie Tuesday pic is "Carnival of Souls" (Harcourt Productions, 1962). The film starts with reckless youths initiating a high speed drag race on Kansas country backroads.
Things take a tragic turn when one of the cars is crowded off an old bridge and plunges into the river below. Rescue workers desperately rally to save the occupants of the automobile, but the murky river makes finding the car nearly impossible.
Miraculously, Mary Henry (Candace Hilligoss) washes up alive on a sandbar where she's saved by the community, but her friends aren't so lucky.
A week later Mary decides to leave her hometown and put the tragedy behind her, taking a job as a church organist in Utah. On her long car ride to her new home, she passes an old amusement park on the shore of the Great Salt Lake that catches her attention.
Soon after she begins to see a ghoulish face out of the corner of her eye, following her everywhere. As she settles into her boarding house and new job she gets the sense that the sinister character is stalking her, but her landlady, Mrs. Thomas (Frances Feist), fellow housemate and full-time scumbag John Linden (Sidney Berger), and new associate Dr. Samuels (Stan Levitt) never see the menace that's terrifying her. As the days wear on, she begins to see more otherworldly horrors following her. Is it survivor's guilt, an undiagnosed psychosis, or something more?

Let's get the detritus out of the way right now. This is a quintessential low-budget "B" movie from the 60s. The film doesn't have a lot of technical gravitas in its favor: The film grade is sub-par, still grainy black-and-white in an age when color film was becoming common. The audio quality is even worse, in that the actors have to shout in most scenes in order for their lines to be heard above the always present hum of the recording equipment. This is even more apparent in scenes that are entirely scripted in post with ADR, as the sync is off and the disconnect is obvious. Believe it or not, I feel that these "faults" actually help the film.

The technical limitations and thin budget (supposedly this entire film was shot for around $30,000 -- about $294,000 in today's dollars) forced the crew to be creative in other ways. The actors aren't exactly giving it their all (but they're quite good for amateurs). Candace Hilligoss's performance is a standout (although that's expected seeing that she is the only full-time professional actress in the cast), switching between aloof, regretful, and disconnected with little more than her overly expressive eyes.

Even though the equipment that the film was shot on was sub-par, the cinematography is INCREDIBLE. The camera always seems to choose creative shots that highlight Mary's isolation, pulling beautiful separation between light and shadow.
An almost exclusively pipe organ soundtrack builds along with Mary's fear, but is completely silent at other times and makes scenes even edgier with its absence.
This is helped even more by the locations. The movie's centerpiece is the Saltair amusement park during an off-season, taking a location typically full of people and making it eerily empty.
The "ghouls," while incredibly cheap monsters to create (simple black costumes, white and black fright makeup, and really nothing else) are nonetheless among the creepiest creeps ever put to celluloid.
The simple story still manages to end on a twist that modern audiences may see coming, but is still effective imagery that will stick with them even today. The film somehow still manages to be terrifying without even a drop of blood put to screen.


If you can't tell, I love this film; it's easily one of my top five horror films, and has stuck with me for years. I still get chills watching it.

Although there's no strong language, no blood, and no real on-screen death, I wouldn't recommend watching this with young children; the movie isn't really action-packed for the most part, and the ghouls are still likely to give them nightmares.

While I watched it on DVD, "Carnival of Souls" is a public domain film and is available at many different sources -- for free! You can watch a restored version at archive.org, here.