The Adventures of Ichabod and Mr. Toad -- WATCH THIS MOVIE (again) 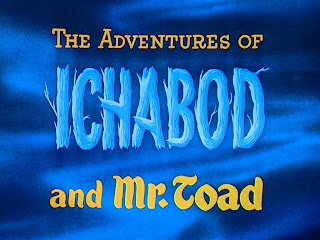 Tonight's Spooky Tuesday pic is "The Adventures of Ichabod and Mr. Toad" (RKO/Disney, 1949). This is a compilation of two short features from the tail-end of a time when Walt Disney and his studio focused more on short standalone stories and musical animation rather than full feature-length narratives. This is usually attributed to manpower and resources being depleted by World War II.

The Wind in the Willows

The first of these is an adaptation of the main plot of British author Kenneth Grahame's novel "The Wind in the Willows." In this short we are introduced through the narration of Basil Rathbone to a river community of anthropomorphic animals. This consists of Rat (Claud Allister), a steadfast British gentleman, Mole (Colin Campbell), Rat's kind but slow-witted compatriot, Angus MacBadger (Campbell Grant), the cranky Scottish manager of Toad Hall (the county seat of the locality), and Toad Hall's owner and heir Mr. Toad (Eric Blore), whose flights of fancy and rambunctious temperament have driven the once-regal hall to the brink of financial ruin, much to the chagrin of Mr. MacBadger.

Since Mr. Toad had acquired a yellow "Gypsy caravan," he and his equine friend Cyril Proudbottom (J. Pat O'Malley) have been literally tearing up the countryside, causing their neighbors to flood the hall with requests for recompense.
Things take a turn for the worse when Mr. Toad sees an automobile for the first time, sparking a new mania.
Mr. Toad's friends are forced to sequester him in his room at Toad Hall until it has passed, but he escapes and is soon after jailed for car theft. At his trial, Mr. Toad (foolishly representing himself) explains that he traded the deed to Toad Hall for the automobile he was caught with, but his own witness turns on him and accuses Toad of trying to sell him a stolen car.
Sentenced to a prison sentence of twenty years, a repentant Mr. Toad soon escapes and attempts to clear his name of the false crime.

This segment was originally meant to be a feature length production, but was cut due to a lot of the animation crew being drafted to the war. Some sharp-eyed viewers will also note that the gang of weasels that occupy Toad Hall near the end were later used as the direct inspiration for the "Toon Squad" in the 1980s movie, "Who Framed Roger Rabbit."

Although perfectly delightful, this story obviously isn't very spooky. Still, it has quite a lot of action and comedic chops. It definitely had autumnal vibes, even though the denouement takes place during Christmastime. No, this segment definitely doesn't belong on a "Spooky Tuesday" segment. However…

Ichabod Crane or The Legend of Sleepy Hollow 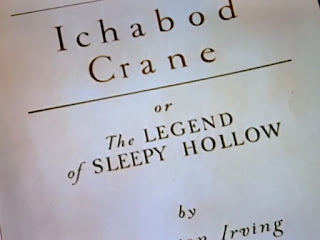 The second adaptation is a Bing Crosby narration of "The Legend of Sleepy Hollow" by American author Washington Irving. For those not familiar with the story, a few years after the American Revolutionary War, the quiet Dutch colonial settlement of Sleepy Hollow, New York, up the Hudson River from New York city and Terrytown is suddenly atwitter with the arrival of the new schoolmaster, the freakishly lanky Ichabod Crane.
The studious and superstitious Mr. Crane quickly endears himself with the community thanks to his level-headed attitude and charm with the local ladies, but this is less from a sense of altruism and more from his unappeasable appetite and social ambition. His ungainly appearance and unflappable attitude quickly makes him the target of the mischievous "Brom Bones," a handsome and athletic local youth.
This antagonistic relationship is elevated to bitter rivalry when both men set their eyes on Katrina Van Tassel, the beautiful daughter of the richest man in Sleepy Hollow.
Brom, for all his strength and looks is quickly outmatched by Ichabod's odd grace, intelligent charm, and greed for the elder Van Tassel's fortune. Nearly defeated at Sleepy Hollow's Halloween ball, Brom uses Ichabod's most prominent weakness against him: His superstition. Brom regales the gathered crowd with the story of Sleepy Hollow's most terrifying apparition, the Headless Horseman, a mounted ghost who rides over the countryside looking for a replacement for his lost head.
The story quickly affects Ichabod who leaves the party to make his way back to the schoolhouse, past the church and graveyard the Horseman is alleged to rise from. Traveling along the quiet road, the terrified Crane imagines all sorts of ghosts and ghouls behind every tree and on the wind. Just as he begins to regain his composure, he is met with the otherworldly form of the Headless Horseman, and the chase begins!


Great for a scare

Okay, so I just had to talk about this segment, which gave me no end of nightmares as a child. Even today, the minutes from when Ichabod Crane leaves the party to his arrival at the graveyard are some of the spookiest, most tense moments ever put to film. The imagery is so haunting and severe that it triggers some primal part of your brain.

Anyone who has ever looked out the window of their parents' car on a wooded country road on a moonlit autumn night knows the exact sensation that this gives; shiver on your spine, the hairs standing up on the back of your neck, the dread when you see those mysterious lights in the forest (are they another car? A house? Or perhaps the candle of a supernatural Jack O'lantern?).
What's more, those anxious moments are followed up by the reveal of one of the scariest villains ever animated. It does not disappoint.

Now, while perfectly serviceable and a fairly faithful adaptation of the short story that it's based on, there are a few notable differences: The book strongly implies at the end that the "Headless Horseman" was Abraham "Brom Bones" Von Brunt disguised to run off Ichabod Crane. This "child-friendly" adaptation however, is left more ambiguous, implying that Ichabod might have actually been taken by a very real Horseman. Interestingly, the character model of Brom Bones in the animation was later used as the inspiration for the character of "Gaston" in Disney's later "Beauty and the Beast" animation, so… Knowing THAT villain, one could even suppose that if the animated Brom was disguised as the Horseman, he could have "done in" Crane himself. It's little thoughts like this that keep the movie fresh in my mind, and something that I come back to every year to feel those shivers.

If you've never seen it, I cannot recommend this movie enough. Even if you can't stand most of the rest of the production, the last ten or so minutes are well worth the runtime (which is a paltry one hour and eight minutes). It is genuinely scary, and may actually give your kids nightmares for years to come (so it's very rewarding).

The Adventures of Ichabod and Mr. Toad is available to stream on Disney+. Watch it with the lights off for maximum fright!