The Gorilla, Through the Lens of The It's Alive Show

It's An Alive Gorilla Show!

Tonight's Spooky Movie Tuesday is "The Gorilla" (20th Century Fox, 1939). Walter Stevens (Lionel Atwill) has a problem: He's just received a death threat from the notorious serial killer known to the public as "The Gorilla."

With a reputation for killing his victims within twenty-four hours of issuing threats, Mr. Stevens has to hurry to take care of his affairs… or does he?
With his butler, Peters (Bela Lugosi) and his maid, Kitty (Patsy Kelly), he delays notifying the police and hatches a scheme of his own.

He invites his niece, Norma Denby (Anita Louise) and her fiancée Jack Marsden (Edward Norris) to the house to discuss her inheritance.
He hires the questionable Acme Detective Agency to act as precaution against the Gorilla, and they send detectives Harrigan (Harry Ritz), Mulligan (Al Ritz), and Garrity (Jimmy Ritz) to the scene.
The three bumbling detectives quickly discover that there's more than meets the eye to the Stevens household: Mysterious callers, a mustachioed stranger who seems to know the ins and outs of the strange house, the butler's apparent supernatural powers, and an actual gorilla (not an actual gorilla)!

This film follows the popular Hollywood tradition of the "dark house." For those not familiar, these are typically suspense/thriller/horror movies that take place in a single location, usually a (haunted) mansion.

They often use murder to set up a mystery plot with memorable characters, revealing the culprit at the end. This feature takes the rare (for the time) approach of using the genre for a comedy as a platform for the Ritz Brothers' act.

But is it any good?

Let's get this out of the way: This movie is absolutely terrible. It's not scary at all. The jokes don't land. The plot isn't complex. The cinematography is pretty bad. Among its few redeeming qualities are Bela Lugosi's weird sinister performance as Peters and Patsy Kelly's hilarious one-liner delivery as Kitty. With almost nothing going for it, why am I bothering to review it at all? Well…

The It's Alive Show makes it better 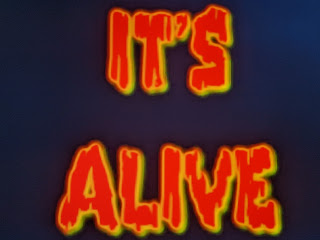 This movie, this specific version of the movie (follow the link at the end) has high nostalgic value for me. Living in Pittsburgh as a perpetually broke college student near the turn of the century, I was fascinated by living in a location that had actual broadcast television stations beyond the big three networks. It was during this time that I discovered a program called "The It's Alive Show," which was produced by Clownhouse Productions (AKA the band "Deathmobile") and broadcast digitally on WBGN (later WEPA). Hosted by band front-man Mark Mehold as the zombie "Professor Emcee Squared," the show garnered quite the following with fans of classic horror, of which Pittsburgh is known for (thanks to a little local film called "Night of the Living Dead").
As far as I can tell, this YouTube video is the last remnant of the show (other than a few clips elsewhere). While it used to stream online back in the day, since the show went off the air (around 2015) the official site no longer has clips, the commercial intellectual property and the licensed nature of most of the films presented means that they can't really create an archive.
Still, this version is intact with all of the local commercials (also produced by Clownhouse Productions) in place, making it a fair representation of the original show's experience.


A brief word of warning

PLEASE NOTE: This isn't the best episode of "The It's Alive Show," as it gets pretty offensive at times. It's still less purposefully meanspirited than your average episode of "South Park," but there is copious use of a negative slang term for the developmentally disabled. Even though the film itself is a light PG affair, the hosted portions of this program raise it to a solid TV-14, so use your best judgement when watching.

Where can I watch it? (Right here)

"The Gorilla" is available to watch on various streaming services, but the "The It's Alive Show" version on YouTube is located here: