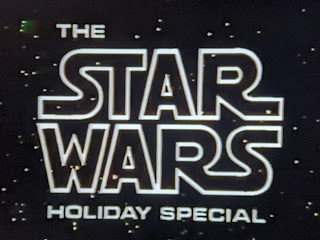 This is a long one, and I've already edited it down, so buckle up.

Tonight's nostalgic pic is "The Star Wars Holiday Special" (20th Century Fox Television, 1978). Privateer Han Solo of the starship "The Millennium Falcon" and his first mate Chewbacca, a wookiee from the planet Kazoo are being pursued by the Galactic Empire in a white-knuckle chase involving Star Destroyers, Tie Fighters, and a horde of imperial stormtroopers.

Meanwhile, Chewbacca's family is awaiting his arrival for their annual celebration of "Life Day." His wife, Malla, is worried that he won't make it back in time. His father, Itchy, assures her that he's on his way.
His son, Lumpy, is anxious waiting for his father to return. We follow the trio as they prepare their home for the holiday, stopping occasionally to consume some space-age media or contacting their friends in the Rebel Alliance to check up on Han and Chewie.
All the while, the Empire tightens its grip on Kazoo as they pursue the crew of the Millennium Falcon across the galaxy. Can the duo make it back in time for Chewbacca to celebrate Life Day with his family?


Okay, we're finally getting to it. This is "that" Star Wars show, one of the most infamous television programs ever made. I know that I can't really say much about it that hasn't been written or criticized before, so I will try to add my personal memory of this program.

What are the issues?

Before we get to that though, some air cleaning:

This is a sort of a variety show style television program with the "Star Wars" brand used to showcase the various segments. Every few minutes there's a music video, an acrobatics show, a cartoon, or a comedy sketch shoehorned into its hour and a half runtime, and virtually none of them are related to the main story.

The musical segments are sort of funny, as they take existing instrumental music from 1977's "Star Wars" and set lyrics to it. Bad lyrics.
They're honestly funnier than the comedy segments, which is a shame considering that the comedy bits star the legendary Art Carney, Bea Arthur, and Harvey Korman.

You say Kazoo, and I say Kashyyyk

Calm down, Star Wars nerds: I know that the planet is canonically called "Kashyyyk," but it is only ever referred to by name once in this program and is identified as "Kazoo." It might be subversive Rebel agent Saun Dann (Art Carney) trying to make it seem like he's dismissive of the wookiee culture while talking to the Empire, but honestly I think that would be attributing this program a level of sophistication that simply isn't there.

George Lucas is on record saying that he would like to track down every copy of this film and "smash it with a hammer." Here's the thing, though: This might be the most "George Lucas" thing I've ever seen.

I've read some of his original treatment for the movie that would eventually become "Star Wars Episode IV: A New Hope." I remember when he crammed in a (terrible) musical number into "Return of the Jedi Special Edition."
I have seen Episodes I, II, and III, Howard the Duck, The Radioland Murders, etc. This is only MARGINALLY worse. Although Lucas is not credited on the special's IMDB page, his stink is all over this thing.

Kind of a letdown

This film's biggest sin is that it's boring. Almost all of the action bits and exterior shots are clips and cuts from the original movie that were repurposed for this film, and I'm estimating that they account for less than five minutes of the entire runtime.

This thing affected me personally.

Now for my own personal story about this film:

Even children alive during the 90s don't understand what it was like growing up in the 70s and 80s. We didn't have on-demand video or YouTube. DVDs didn't exist yet. Most of us didn't have VHS and those of us who did didn't own a lot of VHS tapes because they were prohibitively expensive. In the 70s many low-income households didn't even have a color television set. I say this, because when we wanted to see a movie we had basically two options: Going to the theater or seeing it on live-broadcast television. As a child, if you wanted to relive a movie your only options were storybooks, comics, and even the occasional radio dramatization. You need to understand this, because it's important to the rest of my story.

This progam is one of my first persistent memories as a child. I was three years old when this first aired in November of 1978. I had first seen "Star Wars" in the summer of that year at the local drive-in theater a year after its release, and I was hooked. I have vague remembrance of watching the Holiday Special in my grandparents' living room and struggling to stay awake before being carried upstairs to sleep. During the night, I had vivid dreams of the Empire tearing apart Lumpy's room, destroying his stuffed bantha, and how sad it was.

I had nightmares of Harvey Korman's volcano-headed alien character Krelman.
I slept to Carrie Fisher singing the Star Wars theme. I need to reiterate this: All of these things happen in the film.


So when I started kindergarten the next year (1979), and began to develop some social skills between that and the first grade (1980), I remember recalling the Holiday Special -- which I thought was a legitimate Star Wars film -- to my schoolmates. I was immediately singled out as a liar. It seems that I was either the only one who had seen the show or was at the very least the only one who remembered it. But it was okay: CBS played "Rudolph the Red-Nosed Reindeer" and "Merry Christmas, Charlie Brown" every year, so I would be redeemed when they played the "Star Wars" show again, right?

Except that it never aired again. Being a child in a rural community with limited access to print media and no interest in books without pictures (I was five, after all), I had no way to prove that it even existed. Between this incident and Inspector Gadget's mustache (yes, that is a thing, look it up), I began to doubt my own memory, my own sanity. I don't think that I ever had the full trust of my grade school classmates after that, and I spent the rest of my life doubting my perception of reality.

Flash forward to 1997: "Star Wars Episode IV: A New Hope" is back in theaters as a shiny new "Special Edition," and my friends and I were in Millcreek in Erie, PA shopping at a store called "Media Play" (here is a brief lament that this store no longer exists). I passed the magazine rack and saw a magazine (I think that it was "Starlog," but I have no way to confirm this) with the words "Remembering The Star Wars Holiday Special" on the cover.

My heart began to palpitate. It was all there: The wookiee family. The volcano-headed alien. Carrie Fisher singing the theme song. My excitement level went through the roof! I had to show my friends and tell them the whole story. I finally felt vindicated; after all, if this was real, then what other "imagined" things from my childhood could be real as well? Turns out, it was a lot (including Inspector Gadget's mustache).

Should you watch it?

Yes, this movie is terrible. Yes, it is entirely skippable. No, there is no official release, but if you're curious you should watch it any way that you can (and may god have mercy on your soul).