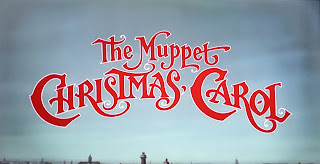 So this follows the same plot as basically every other adaptation of "A Christmas Carol. In Prose. Being a Ghost Story of Christmas" since Charles Dickens first got it published back in 1843. You all know the story by now, so there's no need to retread it here.

This is the fourth theatrical Muppet movie and the first one made by Jim Henson Productions following the eponymous creator's death in 1990 (please note, Jim Henson's Creature Shop never really stopped production and there are a lot of films that Henson worked on before his death that finished up during the lead-up to this one, but this is the first actual Muppet film produced after his death).

My strong opinions on this mediocre film

I hate this film. Well, hate is really too strong a word; I am negatively indifferent to this film. It has problems, so let's get into them.

In some ways this film is a return to the Muppets' origins. The first feature-length Muppet productions were made-for-television adaptations of public domain stories, starting with "Hey, Cinderella" in 1969 and "The Frog Prince" in 1971. Comparing this to those Jim Henson-directed stories, however, is unfair: While those two short features were creative, whimsical, and genuinely funny ("Hey, Cinderella" in particular remains a favorite of mine), "The Muppet Christmas Carol" by contrast seems forced and semi-serious, relying on the narration of Charles Dickens (The Great Gonzo performed by Dave Goetz) and Rizzo the Rat (performed by Steve Whitmire) to deliver almost all of its humor.

Michael Caine stars as Ebeneezer Scrooge, yet he performs the role with a ruthless seriousness that could have easily been transplanted into a serious adaptation of the story, which is a testament to Caine's acting chops given the silliness of the production, but which still feels wrong for a Muppet film.

In many ways, this is what Muppet fans were afraid that the brand would devolve into after Disney's acquisition and Henson's death: Endless public domain adaptations with the Muppet characters as little more than window dressing.


It should also be noted that this is the first Muppet film after the untimely passing of Richard Hunt, and his voice is sorely missed throughout the film. I can't see the Ghost of Christmas Present without thinking that the puppet was made to be performed and voiced by him (the puppeteer behind many of "The Muppet Show" human-sized puppets such as Sweetums), and the fact that it isn't is a painful reminder of his absence.

Remember Kermit the Frog? Because this movie seems to be making a concerted effort to relegate him to cameo status as the barely-in-the-movie Bob Cratchit. This probably has something to do with Steve Whitmire's less-than-accurate reproduction of Henson's voice, which so soon after the creator's death sounds off.

Production-wise, it is a mixed bag as well. While the sets definitely have a Muppet-skewed style with off-kilter architecture, reduced proportions, and painted-on weathering, you'd be forgiven for not noticing due to the monotone style of the color design. In some ways it looks like an old Henson production if you strained it through a "boring" filter. New background puppets look like they're trying a bit too hard to look modern and "edgy," with very little of the endearing felt sock-puppet feel of the originals.

Rather than cast existing Muppet characters to represent the three spirits, entirely new Muppets were created for this task. Design choices are… let's just say unusual, and this is the first version of "A Christmas Carol" I've ever seen put to video or film where the impish Ghost of Christmas Past is far creepier than the silent Ghost of Christmas Yet-to-Come.

This is bad comedy

Is it a bad move? In my opinion, yes. I would perhaps be more forgiving of it if it were a standalone movie, but the next Muppet feature was "Muppet Treasure Island," yet another film adaptation of a public domain story with Muppets awkwardly crammed into it. The problem is that it's not even "so bad it's good," it's just a malaise "90s Disney" film that oozes potential talent but is almost completely rudderless without Jim Henson to guide it.