The Adventures of Bullwhip Griffin

Grab your bullwhip, tip your gryphon. 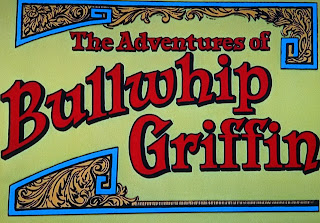 Tonight's nostalgia pic is "The Adventures of Bullwhip Griffin" (Disney, 1967). When the Flagg family's patriarch and the grandfather of Arabella (Suzanne Pleshette) and her brother Jack (Bryan Russell) dies unexpectedly, he leaves a generous amount of his vast fortune to his housekeeping staff including his mild-mannered butler, Eric Griffin (played charmingly by Roddie McDowall).

There's just one problem: His fortune was long since secretly depleted, leaving the survivors in utter poverty. Regaled with tales of "Bullwhip Brannigan" and his pulp novel adventures of the gold rush west, young Jack runs away to seek his fortune. Griffin promises Arabella that he will bring Jack back, and tracks him to a ship bound for San Francisco.

Jack has met British actor Quentin Bartlett (Richard Haydn), who is being shadowed by an unknown person seeking his map to the "mother lode," a vein of gold that would lead to obscene wealth.
After mistakenly assaulting Griffin and accidentally stranding him on the departing ship, Bartlett offers Griffin and Jack partnership in return for their aid in evading his mysterious assailant, who turns out to be "Judge" Higgins (Karl Malden), a devious thief and conman.
The rest of the movie follows the adventures of Griffin and Jack as they make their way across the west, alternatively in pursuit of and being pursued by the identity-switching Judge Higgins while seeking the mother lode.
Along the way they will become embroiled in the bustle of the booming city of San Francisco, find and lose fortunes, make new enemies, and build the legend of "Bullwhip Griffin."

This is a mostly forgotten comedy western that is similar to but predates films like "Support Your Local Sheriff!" and Disney's own "The Apple Dumpling Gang." Unlike many previous comedy western films, this movie embraces absurdist tropes of 60s cinema, including cartoonish scene transitions, comedically sped-up action sequences, and ridiculous visual gags; they really come out in the bare-knuckle boxing match between Griffin and the Golden Nugget Saloon's bouncer "Mountain Ox" (Mike Mazurki).

Karl Malden's Judge Higgins is less of a sinister villain and more of a comedic foil for the heroes, with an array of ridiculous disguises and ludicrous excuses for his villainy.

I really liked this movie. McDowall makes an unlikely leading man; Griffin is honorable, steadfast, clever, and friendly while remaining meek and humble. The villains act as more obstacles than outright evil, while even an ill-tempered monster like the witless Mountain Ox can be redeemed by the end.

The drawn title sequences and occasional transitions enhance the comic nature, and the goofy elements transform what could have been a mean-spirited bloody affair into a family-friendly journey that while short on action is high on charm.

Please note that the version I reviewed is NOT the original cut of the film. There are some pretty culturally insensitive references sprinkled throughout the film, and the current streaming version uses truncated cuts and alternative ADR to soften the blow. Judge Higgins disguising himself as a Chinese immigrant is one of the worst offenders, so please be aware that stuff like this is in the film and should be discussed with family members who might be more impressionable.

"The Adventures of Bullwhip Griffin" predates modern content ratings, but I would say that it is a solid "PG" movie, with threats of violence, depictions of alcohol and tobacco use, gunshots without any actual death, and absolutely no swearing or nudity. It is currently streaming on Disney+.