Not exactly a Disney classic, but worth a view 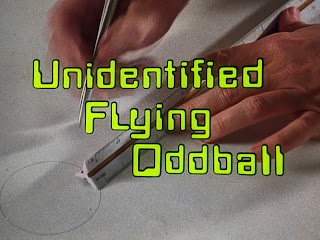 Tonight's nostalgic pic is "Unidentified Flying Oddball" (Disney, 1979). The National Aeronautics and Space Administration (NASA) is getting ready to launch Project Stardust, a brand new ionic-drive space ship with the ability to travel the speed of light, bringing a new era to space exploration.

There's just one problem: The senatorial oversight forbids the manned probe from being manned by a human being. To this end, they enlist engineer Tom Trimble (played by the equally alliterative Dennis Dugan) to create a solution in the form of an android doppelganger of Trimble named "Hermes" (also played by Dugan).
Hermes becomes sentient right before the launch and has an existential crisis about not being able to ever come back to Earth. When Tom comes aboard Stardust to talk to Hermes a bolt of lightning from an oncoming storm causes the ship to launch, damaging Hermes and causing Tom to be the first human being to travel faster than light.
When the probe lands back on Earth, Tom discovers that he has traveled back in time and space to ancient England, where he meets the naïve wench Alisande (Sheila White) and her gander, "Father," that Alisande believes is her father transformed under a curse.

The trio are quickly captured by the aggressive Sir Mordred (Jim Dale) and taken to the court of Camelot to meet King Arthur (Kenneth More in his final role).

Using his pluck and amazing space-age gizmos, Tom quickly wins over the king and makes enemies of Mordred and the wizard Merlin (Ron Moody).
When Tom happens upon a plot to subvert the king and steal his land, he quickly rallies to the rescue with the help of Hermes, Alisande, and squire Clarence (Rodney Bewes). Can Tom battle the insurrectionists and repair the Stardust to find his way home?


The edges, sanded off

This 1979 comedy is a very loose adaptation of "A Connecticut Yankee in King Arthur's Court" by Samuel "Mark Twain" Clemens. Most of the cast of characters is different, the story uses humor and goofy solutions to problems that are solved rather violently and heavy-handed in the book, and the more mystical elements of the novel are ignored completely in favor of scientific reality.

Filmed on location in Northumberland, England, it features beautiful outdoor sets on the English countryside as well as spacious indoor locations. The score is typical low-budget Disney for the time in that it's barely memorable (a particular disappointment since the film goes out of its way to name drop Fleetwood Mac and The Rolling Stones), but it's pretty benign. It's a G-rated film, and pretty deserving of it: There are no obvious on-screen deaths despite numerous scenes of swordplay and a rather robust battle scene at the end of the film, and even though there are scenes of destruction and threats of violent death they are usually pre-disarmed by Tom's scientific know-how, so don't be afraid to watch this with young children.

Emblematic of the era (not necessarily for the better)

This was made by Disney at a time when the studio was consistently churning out theatrical duds. The upside is that we can enjoy their goofiness now, but at the time these films weren't money-makers. The special effects were not state-of-the-art even at the time, and have aged pretty badly since then, so don't expect to be dazzled with amazing visuals. In particular, any scene involving flying objects (and there are a few) has pretty obvious strings.

The jokes aren't exactly high comedy, but they're worth a chuckle or two and very appropriate for younger audiences (there's several scenes where an adult magazine is passed between characters, but it's not dwelled upon.

I love this film: It's silly, it's utterly toothless, but it's not boring and it's just cheesy enough to make it worth a watch.

Where can you see it?