The Island at the Top of the World

Exploring the frozen Arctic before it's gone

(Please note that this is a previous review from June 2022) 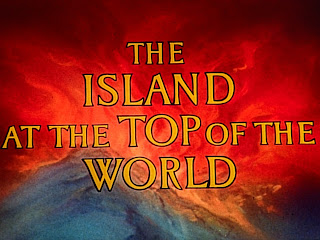 Tonight's nostalgic pic is "The Island at the Top of the World" (Disney, 1974). When Professor Ivarsson (David Hartman) is shanghaied by eccentric Sir Anthony Ross (Donald Sinden) for a desperate mission to find and save his son, he couldn't foresee the incredible adventure that lay before him; airships, lost islands, poodles, Viking warriors and more await in this family friendly adventure!

So, here are some of my thoughts on this film: First, I'm not sure whether it's the print that they used for the transfer or the photography techniques employed during filming, but this production looks terrible. There hasn't been any digital restoration as near as I can tell, as film artifacts and what appears to be burn-in or schmutz on the transfer equipment are persistent throughout.


Second, Disney used the same film techniques that they had been using for decades when they made this. Green screen backgrounds, models, elaborate soundstage sets, stock footage, and plenty of on-location shots compose this film.
Combined with the degraded filmstock, this movie seems like something from an earlier period than when it was actually filmed.


I have to say that I love the acting in this film. We have the straight-laced and deep-voiced David Hartman as a rather unconventional heroic lead, the always delightfully hammy Donald Sinden barking orders at his crew, and my personal favorite, Jacques Marin as the highly energetic airship captain, Brieux.

This film is also noteworthy as one of the earliest silver screen appearances of the always delightful Mako playing the Inuit guide, Oomiak.


Definitely not for everyone.

Is it a good movie? Not especially. It's ugly to the point of being repulsive (the color palette is very off-putting).

There isn't a lot of action, but it's more of an adventure film than an action movie. I do like the effort put into making the old Norse language and sets seem legitimate.
Also, they don't do the Star Trek/Doctor Who thing of making all of the other cultures speak perfect English, which I always admire (it's also a good way for the English-speaking characters to pass exposition amongst themselves).
I expected that this would be a terrible joke film, but honestly it isn't bad enough to be a joke, but also not good enough to be very memorable, leaving it in an odd cinematic purgatory.


If you remember seeing it, it's worth checking out again. If you haven't, it is a mildly entertaining glimpse into a transitional period in cinematic history (the "before and after" of Star Wars).

Where can you see it?

Email ThisBlogThis!Share to TwitterShare to FacebookShare to Pinterest
Labels: Disney, Donald Sinden, Movie review, movies, The Island at the Top of the World, Walt Disney