The Apple Dumpling Gang Rides Again: Exactly What You Expect 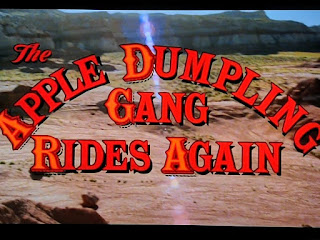 First, we are given a brief courtesy mention of the characters from the previous film before they are never referred to again. The trio, Amos, Theodore, and their mule Clarice (uncredited) ride into the bustling western town of Junction City (not "Quake City" from the original movie) looking to make their fortune on the straight and narrow, their absolutely uncanny incompetence immediately gets them in trouble with local businesses, then gets them blamed for a bank robbery in which they are unwitting victims. Now identified as "The Apple Dumpling Gang," Amos and Theodore are pursued by eccentric lawman Marshal "Woolly" Bill Hitchcock (played by the towering comedic actor Kenneth Mars) while they make their escape, soon shanghaied into the service of the U.S. Military at the besieged Fort Concho.

The commanding officer of the fort, Major Gaskill (played by Harry Morgan, who viewers may recall played mayor Homer McCoy in the first film) and his right hand man, Lt. Jim Ravencroft (Robert Pine) have been hit by a number of murders and robberies that have disrupted the fort's supply line for months.
Little do they realize that their problems are about to get worse, as Amos and Theodore try their best to be good soldiers. Can Theodore, Amos, and Clarice clear their names and escape? Will the soldiers uncover the sinister inside plot to steal their payroll? Or will "Woolly" Bill get his men?

So this is the second (and final) Apple Dumpling Gang film, and while it's somewhat heavier on plot than the first film (which it shares almost no throughline with), it continues the comedic tradition.

Whereas the first movie's central focus was on a bank robbery, the stakes here are raised with a bank robbery, a jailbreak, and a train robbery!
We have a young Tim Matheson playing Private Jeff Reed (or is he..?), who is the most complex character in the film, first as a red herring villain before becoming the hero character and love interest of Major Gaskill's daughter, Millie (played by Elyssa Davalos).

Is this better than the first film? Well, that's debatable; while it certainly has more comedic chops, lots of welcome changes of scenery, and a more intriguing spy movie plot, it does lack the heart and familial tone of the first film. For some this might be a detriment, but for others the more prominent roles of Knotts and Conway make this a more desirable film.

There was clearly more effort put into making this film seem like a western than the first one, having been filmed in mostly desert locations rather than just a forest in California, and that greatly helps the pacing. I'm actually pretty sure that when people think of "The Apple Dumpling Gang," this is probably the movie that they remember. If you like slapstick family-friendly comedy, you really can't go wrong with this film.

For every positive, there must be negatives

Negatives: There are only two (extremely minor) roles featuring POC, but that's still a step up from other Disney movies at the time.

We still have indigenous people depicted as offensive stereotypes played by white men in "redface," but it's only for a brief scene which serves to bring the real criminals to justice (still quite offensive). The romantic arc between Tim Matheson's character and Elyssa Davalos's Millie is best not to think about too much: They only know each other a short time and Matheson's character is VERY forward… it's kind of creepy, in a "James Bond" sort of sexual harassment way. These are only small gripes, though, and don't necessarily hurt the film as a whole; most viewers probably won't even notice… Which is sad in itself.