Mars and Beyond... Maybe.

Beyond space and time, there is... Mars and Beyond! 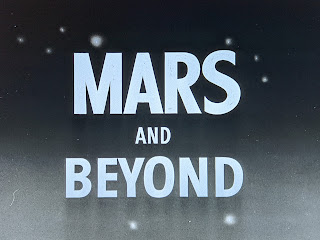 Tonight's nostalgic pic is "Mars and Beyond" (Disney, 1957). Similarly themed to 1955's "Man in Space," this is another episode of "Disneyland" (AKA "The Magical World of Disney" from when it was originally being broadcast on the ABC network) that deals with space travel.

It starts weird, and stays weird.

It starts with an awkward introduction with Walt Disney (and a rather disturbingly lame robot) before we get to the first animated segment, narrated by the immortal Paul Frees, which deals with man's conception of the Earth's place in the solar system, the galaxy, and the universe.

This is followed by a fairly detailed look at the evolution of life on planet Earth (which I'm sure caused quite a stir with religious ignorance in 1957… and sadly probably now, 65 years later).

From here we transition to a historical (and quite comedic) overview of mankind's infatuation with the idea of life on other planets within the solar system.

This leads into a very 1950s overview of what the surface and life on Mars might be like, hosted by E.C. Slipher, one of the premiere Mars astronomers of his day. 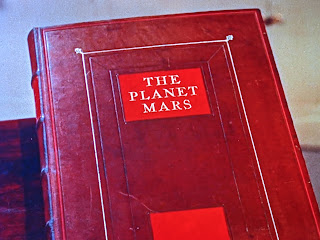 If you're offended by me calling a Nazi a Nazi, you might actually be a Nazi.

The final segment is an imagination of the first mission to Mars through the (incredibly optimistic) lens of 1950s space technology. This segment relies on designs proposed by World War II veteran (guess which side) Ernst Stuhlinger and fellow "Operation Paper Clip" beneficiary (and bonus Nazi) Wernher von Braun.

Side note: Operation Paper Clip was a U.S. program that allowed German scientists (even Nazis, SS officers, and other actual war criminals) to come to the States to continue their work on rocket propulsion, basically without any acknowledgement or punishment for their crimes against humanity. Your tax dollars at work.

Nazi scum aside, I really did enjoy this episode. I love these 1950s style cartoons with their bold cubism-inspired designs and simple animation, but you'd be forgiven for not knowing that this was a Disney animated production because of that (other than one absolutely hilarious and brief cameo by Donald Duck). Most of the episode deals more with mythology, science fiction, and outright fantasy than science fact, which does somewhat unfavorably shade the historicity of the program, but I do have to say that the scientific speculation parts are a fascinating time capsule of what the public at large thought the surface of other planets were like before unmanned space probes and extra-atmospheric telescopes existed.

The speculation is funny to witness now, and I think that Disney's "Imagineering" department took a lot of liberties with exobiology, but it is entertaining to watch even if the actual educational value is compromised.

"Okay everyone, just hold your breath for 18 months."

The Mars mission segment is delightfully misleading, not even addressing small things like how 20 men would be able to eat and breathe on a small spaceship for an over three-year mission to Mars and back, and making the hilarious assumption that we would send men to the surface of Mars before ever materially touching the red planet with satellites or unmanned probes.

I loved it, and recommend it for entertainment purposes. "Mars and Beyond" is currently streaming on Disney+.