The House On Haunted Hill -- worth a watch!

A house. On a haunted hill no less! 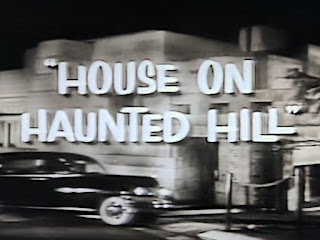 The plot of it all

I know that Halloween is technically over, but as someone cursed to work all major holidays I feel compelled to squeeze in one last Spooky Movie Tuesday. Tonight's film is "The House On Haunted Hill" (Allied Artists Pictures, 1959). Five strangers are driven in a funeral procession to a giant abandoned mansion in the countryside. Each has been promised $10,000 by eccentric millionaire Frederick Loren (Vincent Price) if they will stay the entire night at the "most haunted house in America" for a party in honor of his wife, Annabelle (Carol Ohmart).

Loren invites a diverse cast (of all white people) including test pilot Lance Schroeder (Richard Long),
psychotherapist Dr. David Trent (Alan Marshal),
columnist Ruth Bridges (Julie Mitchum),
and secretary Nora Manning (Carolyn Craig).
With seven brutal and unusual murders committed under its roof, its reluctant heir (and party guest) Watson Pritchard (Elisha Cook Jr.) acts as a guide to the other guests, showing them the crime scenes and trying to convince them to leave before it's too late.

Meanwhile, Loren and Annabelle seem to be having a falling out; he is convinced that she is up to something while she accuses him of unreasonable jealousy. Once midnight arrives the guests will be locked in for the night with no chance of escape.
Why has Loren invited total strangers to the party? Is everyone who they say they are? Is there murder afoot, or will the strangers succumb to the ghosts in the house on Haunted Hill?


The start of a legacy.

This is one of the many horror and thriller films directed by William Castle, who is also known for "The Tingler" (1959) and the original "13 Ghosts" (1960). It is another example of a 'dark house' film; a movie with an ensemble cast set in a single location (usually a mansion) that involves a murder mystery or the supernatural (see my previous review of "The Gorilla" for another example). Castle's films for the time were also known for their theatrical gimmicks. This used "Emergo," whereupon a plastic skeleton would be flown over the audience in the theater once the skeleton in the film emerges from its grave.

While you won't have this experience at home (at least not without some effort on your part), that doesn't mean that the film isn't capable of delivering a fright or two.

There isn't much of a plot. The acting is effective but the dialog isn't stellar. There's not much in the way of gore, and some of the effects might seem laughable to modern audiences.

Up to speed? Good.

I love this movie. It's become a staple of my Halloween viewing selection. Ironically, the rather dated gimmicks used in its filming and production make it timeless in my opinion. The film starts with a dark screen with some rather terrifying sounds that will make you jump if you're not expecting them (or if your sound system defaults to an unreasonably loud volume every time you turn it on like mine did). There are only a few ghostly scares in the film, but they are absolutely memorable and otherworldly. At the same time, the film leaves it somewhat ambiguous as to whether they're all staged or if some are real.

Even if you think that it's campy and a little goofy, the film's incredibly short runtime (clocking in at about one and a quarter hours) the pacing of dialog and scares ensures that you won't be bored while watching it.


There are choices, but are they really choices?

Please note that there is a (laughably) colorized version floating around (as well as a few experimental color overlay versions), but the film was originally presented in black and white, and honestly I feel that it works best that way.

While the film is currently distributed by Warner Bros., the copyright was allowed to expire, meaning that it is now in the public domain. This means that you can watch if for free (legally) at a variety of sources. For this review I streamed it on Amazon Prime, but you can also watch it here.