Cloak & Dagger (not the Marvel one)

Put on your cloak, and grab your dagger

Tonight's nostalgia pic is "Cloak & Dagger" (Universal Pictures, 1984). We're introduced to Jack Flack (Dabney Coleman) AKA "Agent X," a super-spy during the cold war with the Soviet Union that occupied much of the 20th century.

He's everything you could want in a hero: Clever, quick, deadly, with spy gadgets galore. But there's a catch…

Flack is the imaginary creation of Davey Osborne (Henry Thomas, after his debut as "Eliot" in "E.T. The Extra Terrestrial"), a kid who is coping with the loss of his mother by immersing himself in military role-playing and video games with his friends Kim (Christina Nigra) and mall game store owner Morris (William Forsythe).

When Morris sends Davey and Kim to pick up a product catalog from one of his suppliers, things take an unexpectedly deadly turn; Davey witnesses a murder, and the victim passes him a video game "tape" with a secret message.
Of course, by the time he gets people to listen, the murderers have scrubbed the evidence. Taken home to his dad (also played by Dabney Coleman), Davey quickly learns that they bad guys know where he lives.
Can Davey and his imaginary construct of Jack uncover the conspiracy, retrieve the top secret plans, and save the people they love from the cabal of spies that are gunning for them?

I love this movie. It's an adult spy thriller starring a child and his cheesy imaginary friend, and yet it still somehow remains gripping, thoughtful, and even a bit scary throughout. The acting is superb, even the worst actor in the film (a very young Christina Nigra) is absolutely hilarious and believable when she needs to be. The movie doesn't pull its punches: The consequences of violence are in full force, and even though the kids have "plot armor," the people around them are decidedly not immune. Things get quite emotional towards the end (for a multitude of reasons).

Not without problems, however

Is it perfect? Oh no. Not by a long shot.

It's a bit funny that they were banking on the Atari 5200 and its notoriously defective controllers as the video game platform of choice in the film, as almost no one in the 80s owned one.

The "Cloak & Dagger" game featured in the film is actually an arcade game named "Agent X" which was going to ported to the 5200 as "Cloak & Dagger," but it was 1984 when this movie came out, and if you know anything about video game history you know why this is problematic…

Smile, you're on tape

I've heard a lot of speculation online that the film mistakenly refers to video game cartridges as "tapes," and as a kid who played and rented video games in the 80s let me just say that is was common terminology at the time (in much the same way that all video games in the latter half of the 80s were collectively referred to as "Nintendo") and is in no way an inherent error by the screenwriters. I have many memories of my Dad taking us out for dinner on a Friday night, then stopping by the video store to rent a movie and a "Nintendo tape" for the weekend.

Is it appropriate for children? That's a tough call. It only has a PG rating, but note that it's a strong "80s PG." On the one hand it stars kids and does not in any way patronize them or pull its punches. 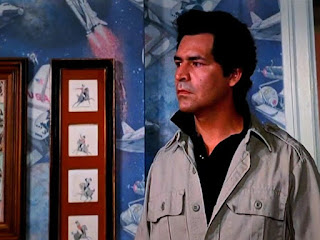 Jack Flack is a cool character and his advice to Davey throughout the film is both humorous and exciting.

On the other hand, there is very realistic death and consequences in the film (with very little gore), and the bad guys are genuinely scary with descriptive threats of violence and the means to carry it out. This dichotomy makes it a tough call, but one should also consider that this film is firmly a product of the 1980s, meaning that the norms of the time were quite different in regards to unsupervised children,

and the "cutting edge" and "futuristic" technology of the time is incredibly dated by today's standards in a way that tech savvy kids might not be able to wrap their heads around.


Where can I find it?

I watched "Cloak & Dagger" on DVD, but it is available to rent/buy on Amazon Prime Video, and nowhere else that I could find.