Hacksaw... Not the tool, not Jim Duggan. 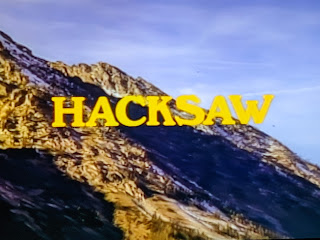 Tonight's nostalgia pic is "Hacksaw" (Disney, 1971). This is another "Wonderful World of Disney" made for TV movie from the disco decade. Tim Andrews (Tab Hunter) is taking big city businessman Olney Curtis (George Barrows) and his daughter Sue (Susan Bracken) on a fishing trip.

Tim is a man of many skills: Bush pilot, cowpoke, classically trained concert violinist, wilderness guide, fish and wildlife expert, tracker, expert horseman, field surgeon, racing driver, computer expert, and game trapper. I only made two of those up (I'll leave it to you to figure out which).
While exploring, Tim and Sue come upon a beautiful horse which Tim explains is a wild stud named "Hacksaw" by the locals.
Sue notices that Hacksaw is interested in the mare that she is riding (Twinkle Toes), and talks Tim into trying to catch the wily horse by using the mare as bait. Thus begins a series of events that leads to Tim bonding with Hacksaw and eventually competing in a championship chuck wagon race.

Confused by that last sentence? Good. I have opinions…

I don't know that I have ever watched a more rambling movie than this one. It's not boring, exactly; it's more like a series of five to ten minute shorts that chronologically connect to one another shown back-to-back over an hour and a half. It's sort of like Richard Linklater's "Slacker" if you just stayed with a couple of characters throughout. While the bond between Tim and Hacksaw is the primary driver of the film, it's not really deeply explored in any real emotional capacity. Even when the movie tries to elevate the stakes by showing a daring rescue or by putting Hacksaw in jeopardy there's no "edge of your seat" suspense. Let me see if I can sum up the plot of this film from memory:

It's like a vignette film smooshed with a "sports film." You've all seen sports films: There's a passionate and skilled individual or team who tries to win but is beaten by an evil cheating rival (in this case Russ McCubbin as "Dusty Trent"), but overcomes their failings through pluck and training and eventually beat the evil bastard(s). The problem with this film is that there's multiple sports and Tim Andrews just falls ass-backwards into them. He loses the first race he ever tries and seems DEVESTATED. He doesn't even have any interest in chuck wagon racing until the last quarter of the film and wins the first championship race he ever tries. How is that an underdog story? And chuck wagon racing. CHUCK. WAGON. RACING. Seriously, how is this a sport, let alone a "big money" sport?!

It looks like an old TV movie, and that's not a compliment: Film transfer with overblown colors, 4:3 aspect ratio, and even some interlacing artifacts visible during scenes of motion (if you're watching it on a modern television).

Should I watch it?

Unless you're really keen on horse movies I would give this one a pass; The transfer hurts the majesty of the scenery, the acting isn't what I would call "top notch," and the story would be cliché if they would just pick one cliché and stick with it.

"Hacksaw" is currently streaming on Disney+.