Fun and Fancy Free. The Disney One. 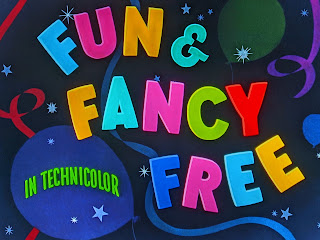 What's it all about?

Tonight's nostalgic pic is "Fun and Fancy Free" (Disney, 1947). In the spirit of other Disney films of the time, this one is a musical vignette program comprising two short segments intercut with framing segments.

We are first introduced to our host, Jiminy Cricket (Cliff Edwards) who leads us to our first story, "Bongo," narrated by Dinah Shore. 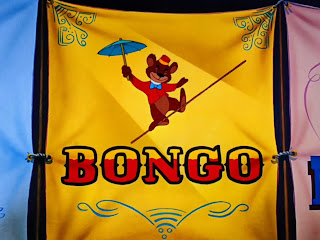 Bongo is a circus bear, an incredibly talented performer who brings joy to audiences everywhere… but behind the scenes he's treated as a slave and lives a lonely, solitary existence.
One day on the circus train his longing for freedom reaches new heights and he manages to break free, slipping away into the wilderness.
For the first time in his life he tastes freedom and nature, and is doubly enamored when he meets Lulubelle, a similarly sized female bear.

The two are getting to know each other when they're interrupted by the hulking Lumpjaw, a bully bear with eyes for Lulubelle.
When Bongo tries to stand up for her, Lulubelle delivers him a few slaps to the face, and then inadvertently slaps Lumpjaw, who sweeps her up in his arms. Hurt by what he perceives as a betrayal by Lulubelle, Bongo retreats dejectedly, only to discover that the wild bears show their affection by delivering slaps to one another.
Can Bongo win back his love from his larger rival?

Mickey and the Beanstalk

Our second story is told by ventriloquist Edgar Bergen and his "friends" Charlie McCarthy and Mortimer Snerd (both his stage dummies who are articulated by other performers in this segment) for the young Luana Patten.

This is the story of "Jack and the Beanstalk" with Mickey Mouse (Walt Disney), Goofy (Pinto Colvig), and Donald Duck (Clarence Nash) standing in for the characters of Jack and his mother. In the land of Happy Valley, all is peace and happiness thanks to the magical music of the Singing Harp (Anita Gordon), until she is abducted by some unknown force.
The land quickly dries up and becomes unlivable, with its few remaining inhabitants starving in the once-prosperous land. In this harsh environment, farmers Mickey, Donald, and Goofy are forced to sell their precious cow in order to avoid starvation.
Mickey trades the cow for some magic beans, which after a confrontation with Donald are lost down a hole in the farmhouse floor.
That night in the moonlight, the beans grow uncontrollably, hoisting the trio into the stratosphere where they come upon a castle owned by Willie the Giant (Billy Gilbert).
They quickly discover that the monster has stolen the harp to help him sleep. Can the three diminutive heroes rescue the harp and restore Happy Valley?

A product of a specific timeframe

As I have mentioned before in other reviews, this film comes from a time when Walt Disney's studio was more focused on short musical cartoons rather than feature-length films. This one has a little of the live-action mixed with animation magic that Disney was developing at the time and later perfected with "Mary Poppins."

It's pretty short, clocking in at just under one and one-quarter hours, which makes it a perfect film for people with short attention spans.

Not exactly a classic...

Chances are that unless you're a Disney diehard, you've never seen or heard of this feature. While it's similar in structure and length to "The Adventures of Ichabod and Mr. Toad," it really doesn't have the staying power of that other film. The "Bongo" segment is very forgettable, following story beats that were cliché even at that time.

I don't know if this has contributed to the collective ignorance of "Bongo," and maybe I'm reading too much into it, but there seems to be an approval (even glorification) of domestic violence in this segment. The "Beanstalk" portion isn't even the first time Mickey Mouse fought a giant, as he already encountered one in "The Brave Little Tailor" short from 1938. The most memorable contribution to Disney arcana in this motion picture was Willie the Giant, who appeared again as the Ghost of Christmas Present in 1983's "Mickey's Christmas Carol" (unfortunately repeating many of the same jokes).

That's not to say that this movie isn't without its merits: For one, the animation is pretty good. It's not going to win any awards, but it is competently done nonetheless. The film is also extremely funny in spots. The Edgar Bergen dialog is more humorous than I was expecting, and really shows why he was such a draw for so long. The beanstalk segment is another great example of Donald Duck being a complete murderous psychopath, which is always disturbingly pleasant to see. The sense of scale in the fight with Willie is communicated well, and overall "Beanstalk" is the standout of the two featurettes.

If you're of a certain age, you probably saw much worse when you were a kid, but the more humorous jokes will probably fly over most children's heads, while the violence introduced in the "Bongo" segment and implied murderousness of Donald Duck may be a bit much for modern kids to appreciate. Also, ventriloquist dummies are creepy at any age, so just be cautious when watching with younger kids.

"Fun and Fancy Free" is currently streaming on Disney+.