I apologize for the graininess of these pictures. Blogger seems intent on shrinking my seven mega-pixel images too small, then not re-sampling them when I try to enlarge them.

I went back to my hometown of Warren, Pennsylvania today for a medical reasons (not mine). While there I decided to snap some photos using various settings on my camera. It's not an expensive piece of equipment, but it is by far the best camera that I've ever owned. I decided to document not a day in my life, but just random views of a town that you would miss if you were flying over, or driving really fast through.

The city of Warren is located in Warren county on the shores of the Allegheny River. Oddly enough this is the same river that I now live near in Pittsburgh, but that's not important now. It is a Victorian-era town that had its boom in oil, lumber, and industry, though much of that wealth has fled. I began my day at Warren General Hospital, and then made my way over the river and across town to Liberty Street. In my lifetime this was once the unquestioned retail center of the county, with department stores for every taste and income. Now I see it being slowly eaten away by the nerve center of Northwest Savings Banks. While it is nice to see that someone is making use of the various neglected buildings and abandoned riverfront parking lots, it is a private setting, and only those who have business there are welcome. Gone are the sidewalk teller windows, Levinson Brothers department store... Kresge's store with its bargain lunch counter. The Viking ship that adorned the H.K. Wendelboe's building an ever-present reminder of the people and wealth the city once had, the dragon's eyes constantly searching for new customers that will never come. 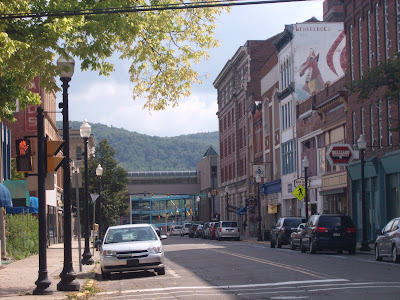 Having time to think about it made me remember days of my youth perhaps more fondly than they were. Twenty or so years ago a boy of twelve could walk down the streets of this town and have adventures, go window shopping, browse the book stores and never feel anything but that this city was alive and that the future was bright.

From here I collected my thoughts and headed to the top of the hill to Washington Park. It wasn't too difficult, although the road is one of those oily country roads that rural Appalachians know all too well. Narrow, curvy, and steep as it is, pedestrian traffic is not welcome but allowed all the same. The trees were green and full of precious life, thankful for both the previous day's rain and the present day's delicious sun. Unfortunately, the trees aren't the road's only inhabitants, and the goldenrod plants were as invasive and aggressive as ever. As I have always lived in Pennsylvania the goldenrod is both a familiar and frequent sight, which makes it my misfortune to be allergic to it. I could smell the stink of its pollen while making my trek, but I had prepared for this with come allergy medication, and the plant's metaphoric teeth had been pulled. The only thing that I didn't prepare for this day was the insects, which were legion in the shade of the trees.

I finally made it to Washington Park, and enjoyed the view for awhile, snapping some quick pictures of the overlook. There was a bit more haze than I would have liked, and because my camera can't use filters or interchangeable lenses the backgrounds look a bit more washed out than I had expected. 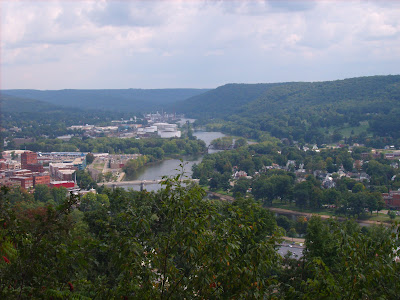 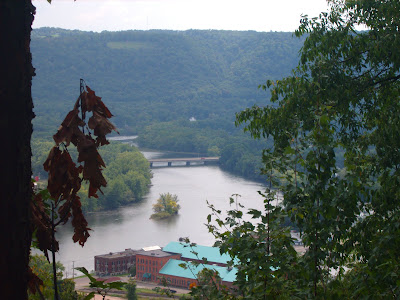 Still, as photos lacking retouches, the greens are quite vibrant.

From that point the insects began to outweigh my desire to film without a telephoto lens and I began the crawl back to town. Once back to my car I traveled to the Warren Mall -- not to shop, but for more pictures.

I wish that I could say that the panorama photos that I took came out even half-decently, but as you can see in the above picture that anything with lines will show seams when you capture it. Unfortunately moving the camera rather than rotating it doesn't offer a much better effect because the foreground will still look inconsistent.

Entering the mall, from the main entrance, you are greeted with artwork depicting derricks pumping the oil that made Warren great. 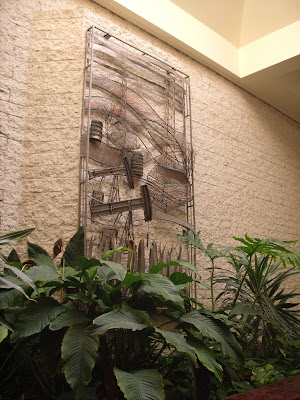 Anyone visiting Warren for the first time will notice that our shopping mall is in the winter years of its life. While the city does have a Wal-mart now, the superstore actually has very little to do with the mall's decline. In 1980 the mall opened its doors to shoppers. There was a time when New York state (a scant ten miles away from the mall) had sales tax on all goods and services, while Pennsylvania didn't require sales tax on food or clothing, and had a lower sales tax overall. This changed at the end of the eighties, and New Yorkers who had once flocked to Warren for duty-free goods suddenly had little reason to come here. The mall still had a selection of stores and was very profitable even then, but the "boom" was over. Later still the stores began dropping off and staying unoccupied, for a number of reasons.

My postulation on why the Warren Mall, and in fact most shopping malls across the country are failing is a bit more complicated: technology. Shopping malls are strange beasts. While being one of the biggest temples of consumerism know to man they are also very communal. Heated against the cold, cooled in defiance of the heat they are meant to be gathering places. In the early days, shopping malls had a plethora stores, each specialized to a different market. There were toy stores, smoke shops, booksellers, pretzel vendors, orange-flavored drink dealers, video game arcades, movie stores, record stores, and novelty stores. When you lived in the middle of nowhere in the winter, it was a small trifle to ask your parents to drop you off at the mall with your friends. In its warmth, you could spend hours buying trading cards, trying to beat a video game, enjoying a movie at the theater, or having a warm cookie or pretzel while you looked at the latest Nintendo games and wondered aloud if it was as good as it sounded. Once, even the back of the mall would have cars parked in it. 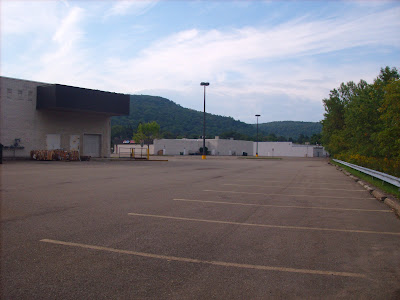 One day though, came a thing called the internet. Suddenly you could look up reviews of products online, no more need to window shop... PROGRESS! 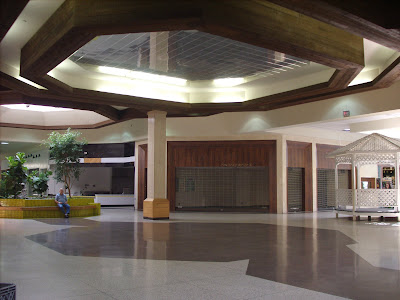 Now comes a 3D accelerator for your computer, followed by a shiny new disc-based video game system -- it's better than the arcade... PROGRESS! 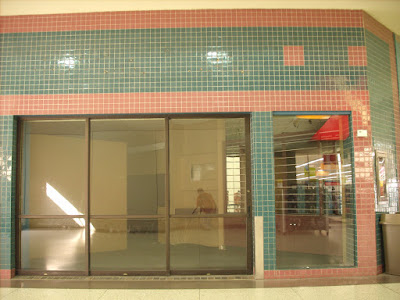 They sell the big pretzels in the supermarket now, and you're sick of them... PROGRESS! 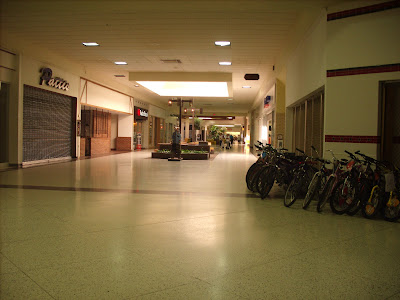 Hey, you have chat programs and cell phones that keep you in constant contact with your friends day and night, no need to meet at the mall with its aging video arcade, closing toy stores, and more expensive pretzels, we'll just chat right now... PROGRESS! 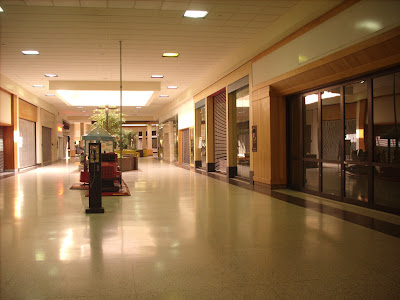 As tech evolved, the need for these "social shopping" places waned, and focus instead shifted to spaces where everything was packed haphazardly under one roof. Business here has dried up like one of the building's many fountains. 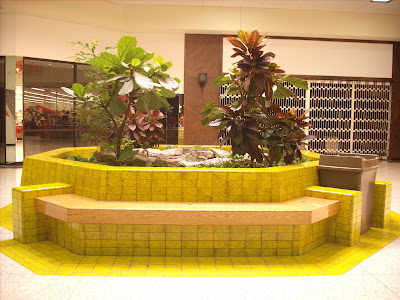 I cannot remember the last time when I saw any water in these.

One of the Warren Mall's last casualties was the Waldenbooks. 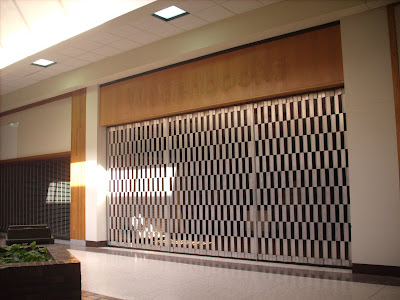 I spent many hours here in the entirety of my life; my mother bought me Star Wars picture books in my youth, this was one of my regular stops for comic books in middle school, and from high school and beyond the only place I could go to purchase my very own copies of classics and nonfiction, as from that point on it was the city's sole purveyor of books (but only if you don't count the romance novel exchange downtown). It's gone now in the wake of Amazon.com and heartland America's declining readership, but it will not be forgotten.

To the critics who might see the last half of my essay as nostalgia and glorification of rampant consumerism, I humbly admit that at least on the surface it would seem so. Though I can be materialistic and shallow, this place is dear to me not for what I purchased from within its walls, but for those scant hours that those who I called my friends would celebrate the end of a long week of school with pizza, pretzels, and laughter.
Posted by ARCWuLF at 9:00 PM