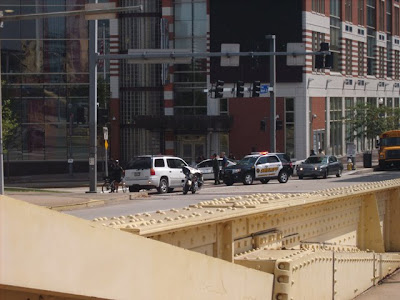 As I was walking back to my apartment from downtown with the roll of quarters that I needed to start my ever-mounting pile of laundry, I noticed that there was a lot of police blockage throughout the city.  Intersections in the vicinity of the David L. Lawrence Convention Center were closed off for no apparent reason, and there were National Guard and Pittsburgh Police boats in the Allegheny River.  I had to wonder what was going on, as the G20 summit doesn't start until September 24th, and the city's current "Spit-shine Pittsburgh" campaign (wherein downtown areas that homeless and low-income people usually gather are closed and torn up supposedly for improvements but more probably so that the G20 chairs don't see the seedier side of our economically depressed town) seems focused on our already recently renovated parks and historic districts. 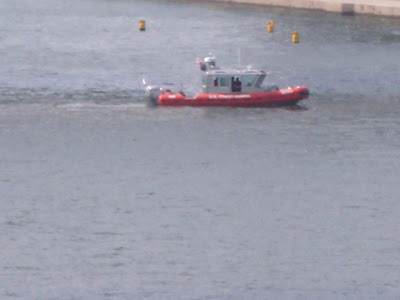 It turns out that the police were there because the president of these United States was speaking at the convention center for the AFL-CIO convention.  I watch the news when I can and was understandably quite surprised that this missed my notice.  I think that it is noteworthy though, that during the MLB All-Stars game the Coast Guard boats had rather large chain-fed machine guns on their decks, but a visit from the POTUS didn't seem to warrant as much intimidation.

Watching parts of Obama's speech on the news later, I do agree with him to some degree:  the middle class is better off with unions in place.  Let us not forget though, that the reasons that unions worked originally is because they took a bat and fists approach to abuses of the workers (they actually physically threatened management).  As soon as unions became "legitimate" businesses, the people at the top refocused their legally questionable methods from management to the workers they claimed to protect, often taking much and giving back very little.  Unions don't work when the purpose of their existence switches from protecting workers rights to keeping the union going.  These should not be mutually exclusive ideals.

I think that one point everyone can agree with the president is in saying that Kanye West is indeed a jackass.