Over the past two weeks I have had no less than three strangers comment on how nice my watch is.  Those individuals really have no idea just how wrong they are. 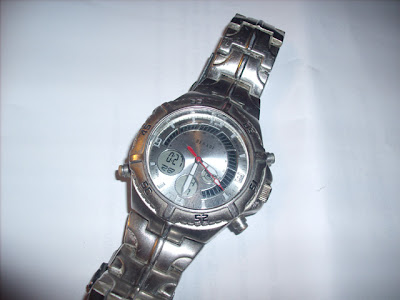 It's not that it's a bad watch; this has been the best non-calculator watch I've ever had.  I didn't pay much money for it, as I recall it was only about $17 when I purchased it from Sears a few years ago, and it was more than worth it at the time, with both analog and digital functions, a stop watch, timer, back-light and movable bezel.  In fact, this watch might still be in use this very moment if I hadn't insisted on wearing it to my job at Home Depot and subsequent sh** jobs of the past few years.  This unreasonable wear and tear has caused some functional and visible blemishes.

The first real problem I had with the device was when the back-light button fell off.  Oddly enough, this was only a marginal annoyance, as the glow-in-the-dark hands made reading it in intermittently lighted conditions easy. 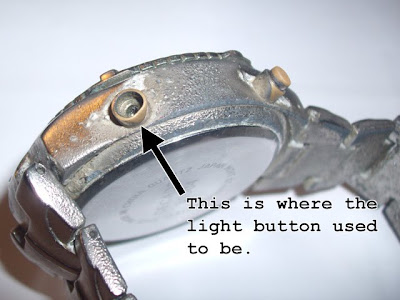 Ever since the mid-nineties, I prefer my watches to have metal bands, as the rubber plastic of every watch I've ever owned cracks and falls apart after a few months of wear, and replacing the things wasn't always easy.  With a metal band, usually the case will crack before the band wears out... unless you start losing the pins that hold the band together.  Most pricier watches have removable links in a metal band, but as I established early on I didn't pay much for this one, so it might come as little surprise that I lost a critical pin for the band's clasp earlier this year.  Being the resourceful chap I am, I simply substituted a small paper clip for the wayward pin. 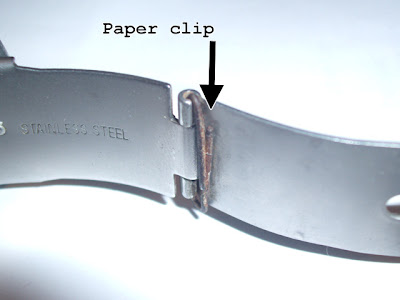 While the paper clip does a fine job of holding the band together, it does a pretty bad job of not chafing my wrist with its rusty painfulness.

So late last week, my watch's analog hands began slowing down disproportionately to the time on the digital face.  I had to wonder whether it was because that the battery was dying or if the case's extreme corrosion had finally crept into the watch's innards. 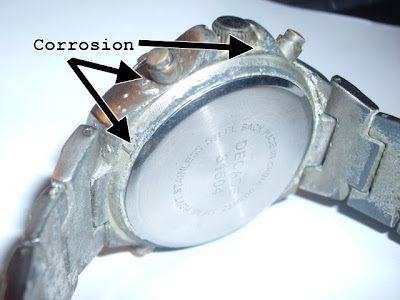 I decided to open up the watch and see about replacing the battery.  I got my jeweler's screwdrivers out only to find that the case had no screws - this isn't unusual, as this isn't a diver's watch and therefore it is just a friction back.  Unfortunately, the corrosion has gotten so bad that I can't get the back panel off.  I've been trying for days to no avail.  My only option then was to take it to one of the battery replacement places at the mall.  My last experience with these establishments was when my friend Seth took the watch that I gave him there and they charged him a king's ransom for a simple battery replacement ($11+).  So my options were to take it there to see if they could replace the battery (if that was the problem) and if not I would still have to pay them and learn to live without a functioning watch, and/or just use my cell phone to tell time (it's more accurate anyway).

I opted instead to invest $17 in a new watch at Sears (they were on sale).  Even though they had the same model as the one I was replacing, I decided to go with a different one... and the buyer's remorse has kicked in.  I didn't really need the watch (as mentioned before, I could just use my cell phone), but I'm so used to having that metal band on my wrist I was actually getting anxious without it being there.  Maybe I have a touch of OCD, but I needed to replace it and all of my old watches are either childish or broken. 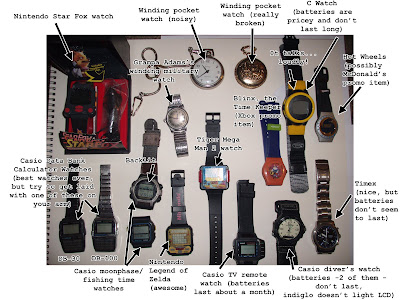 The replacement is slightly larger, a much darker chrome finish, a black movable bezel (with better numeration around) and a fully LCD panel behind the analog hands.  The back light button is much sturdier than my old watch's and the luminous display is much cooler looking.  It isn't without its flaws, though.  There is no countdown timer, which was an often-used feature on the old one, and if I had realized that it was missing it in the store it would probably still be there, though the bezel makes it superfluous.  It also doesn't have the luminescent hands (though oddly enough it does have luminescent hour marks), which makes it difficult to read in low light, but if the back light continues to function it isn't that big of a deal.  It's certainly a better looking watch than the old one, and if I can stay away from exposing it to the kind of abuse that a decent watch shouldn't be exposed to (grout, girders, et al) it will probably last longer. 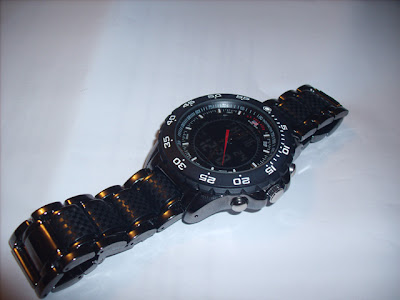 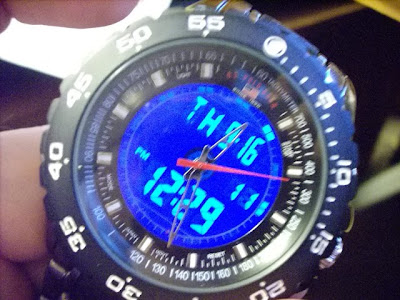 I'll still try to get the other one open.  Anyone know of any good corrosion cures that don't involve spraying liquid on or submerging the very-not-waterproof watch?

Email ThisBlogThis!Share to TwitterShare to FacebookShare to Pinterest
Labels: watches